To know yourself is to know the universe.

It is about keeping up the attack while keeping yourself safe. 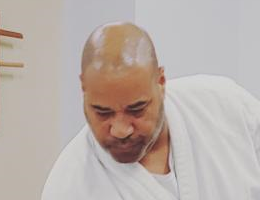 Kenneth Cadogan began his Aikido training in January of 1995 under the instruction of Jim Walsh, Shidoin. Shortly after that he realized that Aikido training was something he wanted to make a major part of his life.

He received his black belt from, Yoshimitsu Yamada, Shihan in December of 2000 and in 2001 he became a student of Donovan Waite, Shihan, whose instruction Kenneth attributes as the primary influence for way he practices and teaches Aikido today. He is one of the regular instructors at Aikido of Chester County. Kenneth Currently holds the rank of Godan (5th Dan Awarded 2021) and is a member of the United States Aikido Federation.